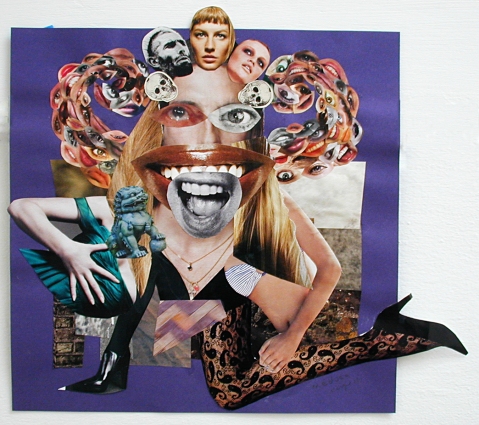 Medusa was the Gorgon who turned those who gazed upon her to stone.  She had snakes for hair, and is often portrayed by the ancient Greeks with her tongue sticking out and/or with tusks or a beard.  Most modern interpretations keep the snakes, but make her more beautiful.

Having a visitor in New York City almost always means going to iconic places.  My guest last week likes to go to the Metropolitan Museum of Art when she’s in town, a place with a collection so vast that I always find things I’ve never seen (or noticed) before.  We spent a long time in the ancient Greek rooms on Friday.

I liked this Medusa on the handle of a jug, which brought to mind that I had done a Medusa collage a few years ago.  I remembered too the little embroidered mask, which is closer to this Greek portrayal because it’s based on ancient Greek sources. 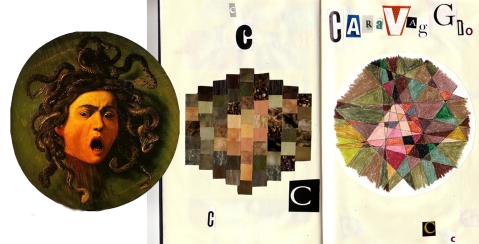 I also used Caravaggio’s Medusa as a reference for my page on him in the “Art I Like” Sketchbook Project.

After Perseus cut off Medusa’s head by using a mirrored shield, he gave it to Athena for her own shield.  And so an image of Medusa is thought by some to have protective powers.