More Turtles (or are they tortoises?)

I’ve painted sea turtles before, when I was doing endangered species on a regular basis.  It bears repeating that nearly all sea turtles are endangered.  Habitat destruction, particularly of coastal nesting sites, and poaching for eggs, meat, skin and shells all contribute to species loss, but one of the biggest problems is that they get caught in fishing nets.  To save sea turtles and the ocean ecosystem they are part of will require global cooperation.

Turtles generally spend most of their time in water, while tortoises reside on land, so why are box turtles not called box tortoises?  Sometimes they are, in fact, but they actually belong to the pond turtle family, so the turtle label is also appropriate.  They are the state reptiles of North Carolina, Tennessee, Missouri, and Kansas.  Populations are declining everywhere due to (surprise!) habitat destruction and fragmentation, but they are particularly endangered in Asia, due to their use in traditional medicine, and the pet trade.

And terrapins?  They tend to live in swampy areas, equally at home in water and on land.

Nina and I have done a number of turtle posts.  With more coming, I’m sure.

You can read more about endangered turtles here. 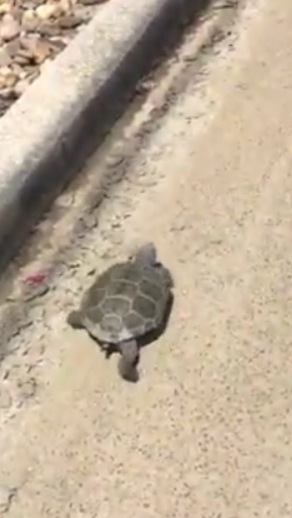 My pal Claudia Placentra posted a nine minute video of a mama terrapin making her way back to the bay after laying her eggs. Claudia wanted to make sure she made it back okay and her video has a cute commentary “you can make it little girl” and other facts about Terrapins. I wasn’t able to share her live video but here are some stills of the turtle making her way back. Claudia is going to send me something later and I’ll try to post. (Kerfe is well aware of my technological shortcomings, yes K., I will make it over to the Genius Bar at Apple soon). Guess it’s turtle week over at MTM.

Turtles are an endangered species “down the shore” as we Jerseyans say. They get run over by cars and their eggs get eaten by seagulls. There are lots of signs for turtle crossings and other warnings about not touching or harming these wonderful creatures. The last photo is of the terrapin making it back to the bay. 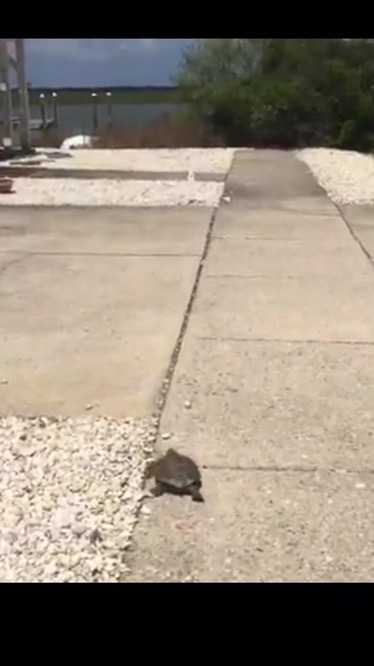 child of the river
I will bow to you, turning
the trick backwards, breath
of knowing healing spirit
spilling water into air

Continuing the turtle theme, I’ve drawn another Kappa netsuke.  I still think Kappa was an inspiration for Teenage Mutant Ninja Turtles, though I can find no evidence online to back this up.  A river deity and trickster who tried to lure people and animals into water, he could himself be tricked into helping humans because of his obsession with politeness.  You can read more about Kappa in this post.

And see all my netsuke posts here.

A Gift From the Sea

at rest in between
sea and land, water and wind
shaping spanning time

This year was not a good one for collecting shells.  But one morning on a walk along the beach, my daughters and I found, half-buried in the sand, a piece of what appears to be a sea turtle bone.

I drew it from both sides, and I also took photos.

Only in the close up can you see the subtle lines of the shell.

Once home I looked up sea turtle skeletons online.

Sea turtles are one of the few creatures to have both an internal and external skeleton.

And of course this must go in Nina’s turtle shell collection!  I will give it to her the next time we meet for lunch.

You can read more about sea turtle anatomy here.

You may notice that the turtle doesn’t look too happy here…that’s because Octopus, the attending physician of the Dragon King, sent him to steal a liver from a monkey, and he did not succeed.  In some stories the liver is supposed to cure the king, and in some the queen, but in all the monkey is able to fool the turtle and escape.

At least I think that’s what’s behind these netsuke.  There are many netsuke that feature other creatures on a turtle’s back.  It could just be that the tortoise is a symbol of good luck and longevity in Japan, and the other animal and its attributes are along for the ride. 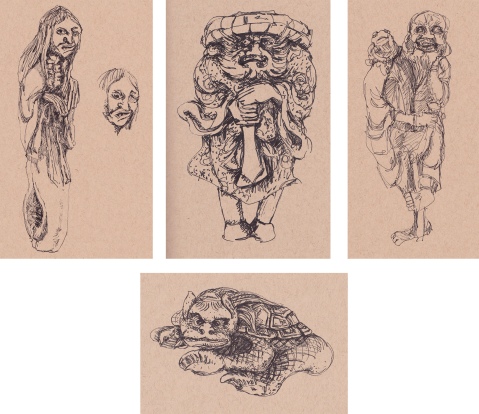 Over the years I’ve acquired lots of different inking implements for different purposes, and I’ve also bought a few recently just to draw with.  I decided to make a comparison by drawing a netsuke with each one to see what I really liked the best for drawing.

These four were done with Staedtler pigment liners; I bought a set I saw at Staples when I was shopping for printer toner (a reason I stay out of art stores…) and I really like them for drawing.

They range in size from .1 to .7, and the difference is most noticeable when you compare the finest to the thickest.  Gama-Sennin, above was drawn with .1.  You can get really delicate lines, but no darks.  I’ve drawn Gama-Sennin before; he’s the immortal mountain god that can change himself into a toad.

With the thickest pen I drew Skoki, the Demon Queller.  A physician who was rejected because he was so ugly (in one legend, anyway), he committed suicide but was honored in death by a remorseful emperor.  His spirit then vowed to protect the ruler and his heirs.  Depicted in netsuke as a large ugly man who wears a hat with a broad brim, his image is thought to protect against evil and illness and expel demons.  This pen provides great darks, but not fine lines. 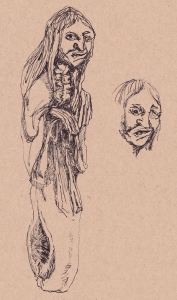 My favorite, and the one I’ve evidently used the most since it’s starting to run out of ink, is the .5 width.  I drew the “Ghost of the Murdered Kasane”, who is a character in a kabuki play.  She is one of many vengeful female spirits, caught between life and death.

The .3 pen also gives a good range of line and depth.  I drew Kappa, a water deity, who is a trickster but also quite frightening, as he kidnaps and eats children.  But he also likes cucumbers, and they are thrown into water in an attempt to appease him.  He has webbed hands and feet, a beak, and a turtle shell, and reminds me in some netsukes of Teenage Mutant Ninja Turtles.  If you meet one, bow:  he will bow back, and the magic water that gives him his power on the top of his head will spill out, allowing time to escape.

I guess a future project should be one drawing using all 4 pens.  Put it on the list.  And more samples from my collection of inking implements to come.

My dog Birdie is good at finding turtles on his hikes. This one was a little messed up but the nice thing about painting something is that you can fix it. Nature: the best artist.

Here is the sweet little guy with a few shields missing:

Jaguars are gone from the United States, except for a few in the border areas between the US and Mexico, where about 100 are estimated to remain.  An additional 15,000 live in the wild in Central and South America.  One million years ago they were also common in Europe.

Closely related to leopards, jaguars are stockier, with stronger canine teeth than other large cats.  They kill their prey, including turtles and crocodiles, by crushing the skulls with their bite.  Jaguars only rarely attack humans, but they like the cattle that humans keep on their ranches.

And so they are killed by cattle ranchers.   They are also hunted for sport and for their fur coats.

Jaguars occupy a wide variety of habitats, but they prefer wet lowlands and tropical rainforests.  The males need a large home range, and human development leading to habitat destruction and deforestation is also a factor in the jaguars’ decline.

One interesting fact I learned:  black jaguars are a result of a mutation in the gene for coat colors. 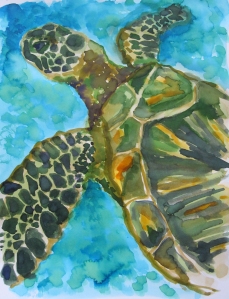 Sea turtles are not only beautiful creatures, they help to maintain seagrass beds and are an important part of the ocean ecosystem.  Human development of coastal areas pollutes and destroys these seagrass beds and jeopardizes turtle nesting sites on beaches.  Global and ocean warming also endanger turtle habitats.

Turtles are hunted for both eggs and meat, and  get caught in commercial fishing nets where they drown.  Another threat is the trade in turtle parts for use in traditional African and Asian medicine.

Today is a beautiful day. I went with Chris and a bunch of dogs to the power lines which is a great wide open area with little trails. I found two turtles, one a hollow shell and the other with the animal inside. There was a hawk circling around and the dogs all had a great time. I had some stuff at home, mainly some ripped up tire treads I found by the railroad tracks. I love picking stuff up, I don’t really know why except sometimes I derive inspiration from it. The turtles are especially beautiful. I’ll have to look up on YouTube how to remove a dead turtle from its shell. Anyway, this is a little assemblage. I will do a drawing from it later.