between waves
ebbing and flowing
together

Instead of a grid or circle collage this month, I decided to use this embroidery that I just finished. I signed up for a series of video embroidery instruction courses–every two weeks there’s a new one, with new ideas and techniques to learn. That was 2 months ago, and I’ve only just finished the first one…

This was a course on Indian embroidery motifs and techniques given by Saima Kaur. We were to choose a few bright colors and a bright background fabric, with perhaps the addition of black and/or white. My satin stitch has always been sloppy and I thought this would give me plenty of practice for improvement. I can’t say it improved much, though, and I also now know for sure that I don’t enjoy doing satin stitch that much. I did like the long and short stitches I used on the shells, and will use that again.

I love traditional art and the motifs of Indian folk art are rich and full of symbolism. This design is a distilled variation of common figures and themes seen both in Indian art and in traditional and religious art all over the world.

“all I did was plant a seed…”—Pete Seeger

they had a vision
if there’s something wrong
the river returned to its origins
speak up!

There’s so much wrong with the world–what can we do? Pete Seeger believed in working locally with the people in your community–what needs to be fixed? Realize that little things lead to bigger things.

Founded by Pete and Toshi Seeger, Hudson River Sloop Clearwater, Inc, has played a major role not only in cleaning up the Hudon River to allow both the river and the surrounding ecosystems to recover and flourish, but in pushing for judicial solutions to pollution everywhere in the United States.

Until I did a little research for this post, I did not realize that Clearwater’s opposition to the Storm King power plant led to the first court case to grant legal standing to environmental groups so that they could file lawsuits to protect the public interest. The NRDC and all organizations challenging the right of business and government to pollute or destroy ecosystems for profit began here–with the Clearwater. This is a tool whose value cannot be overestimated.

I used to frequently see the sloop sailing up and down the Hudson in the years I spent a lot of time in lower Riverside Park. It continues its mission with public education and helping people organize–and of course with music.

The first collage/photo is from my Beach I Ching series. It seemed appropriate to this subject in many ways. The other art is from various things I’ve posted over the years.

This post was inspired by Sherry’s challenge at Earthweal this week: what happens to one, happens to us all.

I spend some hours this weekend sitting and painting some rocks that I’ll put around later when they’re finished. I did some painting too, gouache on black paper and then cut out and pasted on another piece of black paper.

I’ve put out a lot of my rocks. I sort of wish I had counted but I’m not that organized. All I know is people seem to like them (I always keep a few at work which I know goes against Covid as I’ve given a few out there). I’ve kept some rocks that I couldn’t part with:

Kerfe and I wish the WordPress community the best as we head into fall.

I missed Draw-a-Bird Day in March.  Amabie is not exactly a bird, but they have a bird beak.  A Japanese Yokai spirit, Amabie has reappeared recently in fresh interpretations all over the world.  The image of the Yokai itself is supposed to act as a charm against infectious disease.

Mine is a bit more fierce than most, but I feel the ferocity is warranted.  You can read more about Amabie, and see some gentler interpretations, here and here.

Tomorrow starts NaPoWriMo!  As Nina is still on haitus, I will be posting each day at my blog https://kblog.blog/.  Join in!

When I think
of you, I see you
floating, sails
unfurled in
iridescence like fish scales
or maybe crows’ wings,


dark and light
reflected in waves
traveling
unanchored
by time.  Will we meet again
on unmapped seas? or

A elegy for both NaPoWriMo Day 24.  The first one I wrote was quite gloomy.  I took some of the images and began again.

I think the replacement was sent by the Oracle.  It has her mark. 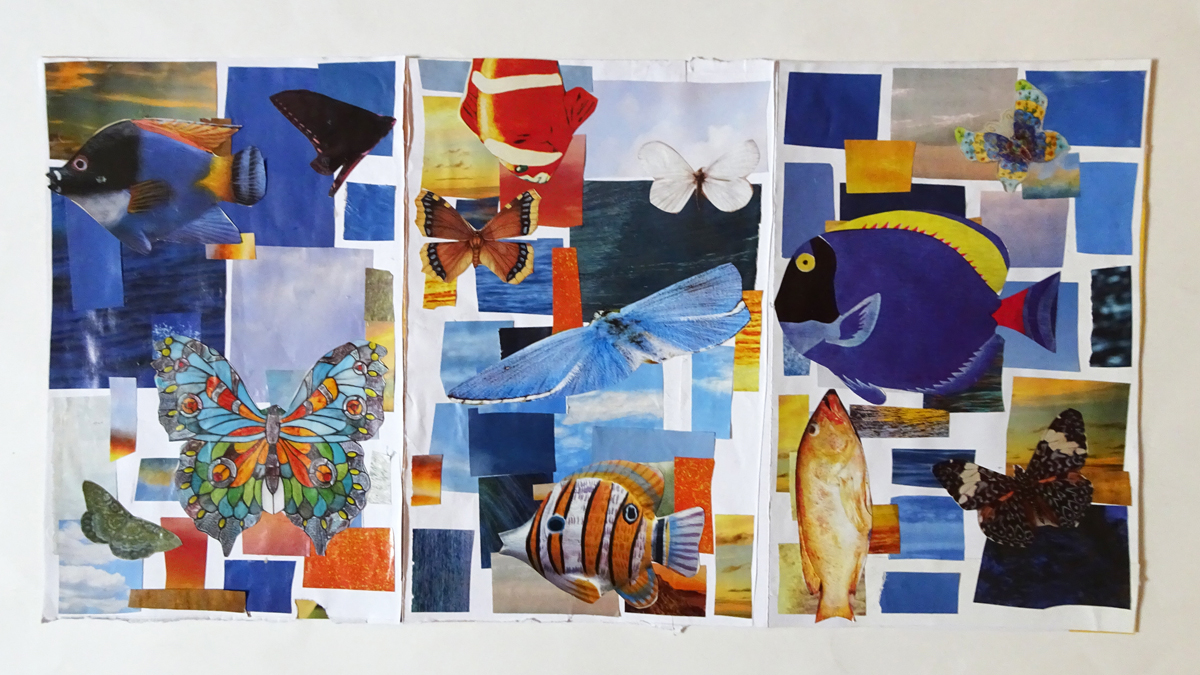 to be weight
less, sparkling colors
in water
or air, caught
ungrounded and threaded with
invisible light

My post for Day 15 of NaPoWriMo–better late than never I guess (wordpress has not been cooperative this morning either)–is inspired by Sue Vincent’s photo prompt, above.  I went off the edge of the page for my response.

The little Tuscaridium cygneum looked so lonely on the paper that I decided to add my next sea creature right along with it. This Tomopteris is a type of plankton. I think they look good together! It needed something else so I added the seaweed. It is not scientific but neither are my depictions.

Here’s the photo from the Times: 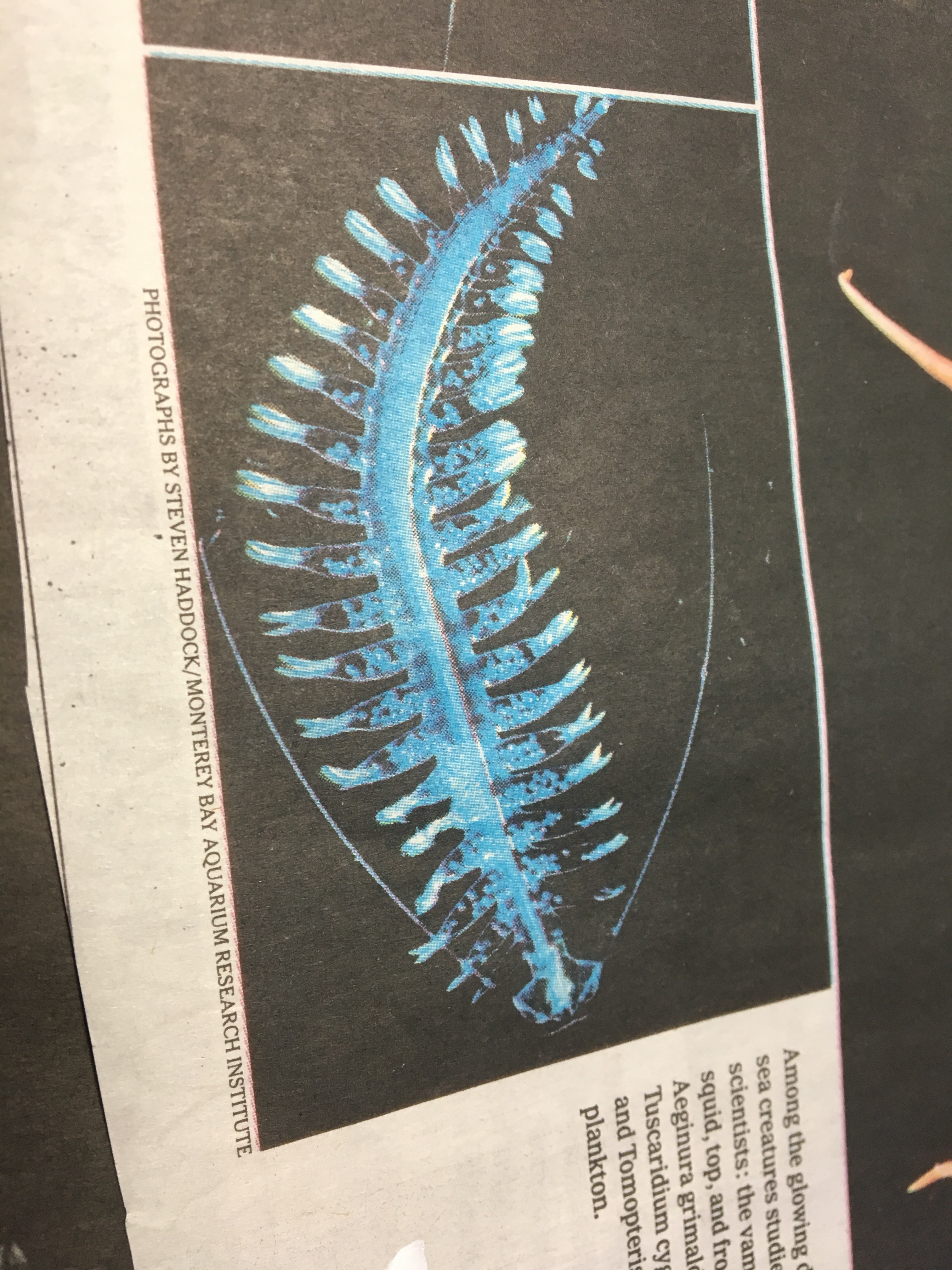 I remembered that I had done sea creatures before: also from the New York Times. I did quite a few of these but could only find this one. I may have posted them before but couldn’t find them. Anyhow, this was also from an article in The NY Times Science section. I hope I can find the other ones. I have a huge pile of paintings but this is the only one I found from that series.

Another glowing deep sea creature which looks like something from outer space. These creatures are quite fun to paint. There are a few more from the NYTimes article which I’ll attempt.

Here’s the photo. I didn’t quite get the intricacy of the animal.

Another beautiful day with a chill in the air. Fall is starting to arrive.

Tuesday’s New York Times Science section featured some wonderful sea creatures which make their own light–bioluminescence. This caught my attention as I’m always looking for things to paint. My first attempt is this grumpy looking anglerfish with lure. I used a lot of silver and if you look at the original it’s pretty sparkly. You can’t really see it in a photo. That’s why Kerfe and I should have a show one of these days, right, (K)?