Anonymous Was a Woman 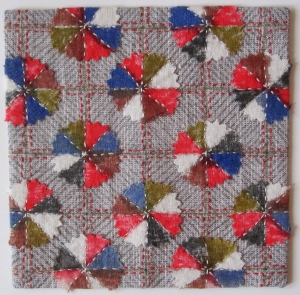 ” I would venture to guess that Anon, who wrote so many poems without signing them, was often a woman.”
–Virginia Woolf

This is often misquoted as “For most of history, Anonymous was a woman.” 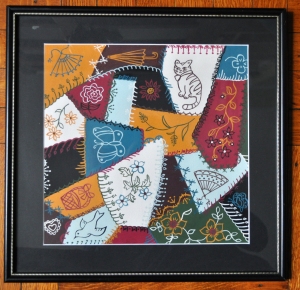 Collage, to me, takes its inspiration from the fiber work of generations of anonymous women.  The women in my family knitted, crocheted, embroidered, quilted; they were milliners and seamstresses.  I have a legacy.  But their work is not signed nor was it ever hung in galleries.  Like much of the fiber work of history that provides me with so many ideas, it was made for use by family and friends, made with love and beauty as a way to provide color and warmth to everyday lives.

When I saw the NaPoWriMo prompt from day 3 to write a fan letter, I went through names of people in history that I admired.  But really, the largest influence on my life comes from these women who for the most part are known by one name: Anonymous.  That Virginia Woolf spoke of the writers who claim that same name adds another dimension to this inheritance.

still anonymous
patterning comfort  who was
hand eye  this woman 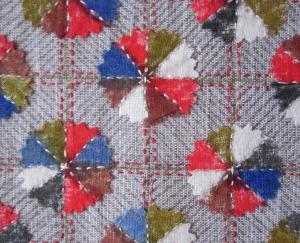 About the artwork:
The top stitched piece and the crazy quilt painting were done for a print rep I worked with for a short time in the early 1990s.  We had an idea that we could sell print patterns based on traditional fiber arts.  The idea did not prove successful in terms of sales, but I ended up with some interesting artwork

The quilts were made by my great aunt Del, sister-in-law to my grandmother, inherited from my mother and aunt.

The collage is from a sketchbook of work based on quilts done in the early 1980s.

I guess you could call this a series because I am obsessed with these roses. I’ve cut them all out of the skirt and there will probably be a few more of these.

I plan on taking a break from the roses, though. Going to do a landscape in gouache resist next. I can see it in my head and that’s always good. 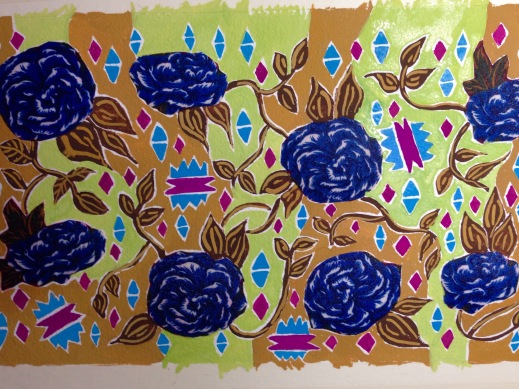 I found an old skirt in the attic. It didn’t fit me anymore but I really like the design and decided to cut it up for a collage painting.

I started by decoupaging the cut out roses onto the heavy watercolor paper I’ve been using. 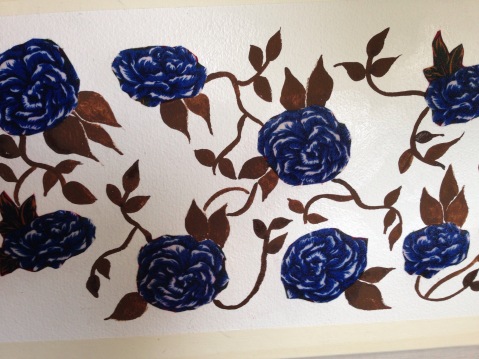 I painted in the leaves and stems in brown and then just let it happen. Here is a shot of the skirt; it is an interesting textile. I seem to be exploring my old textile design roots but I’m not fighting it! 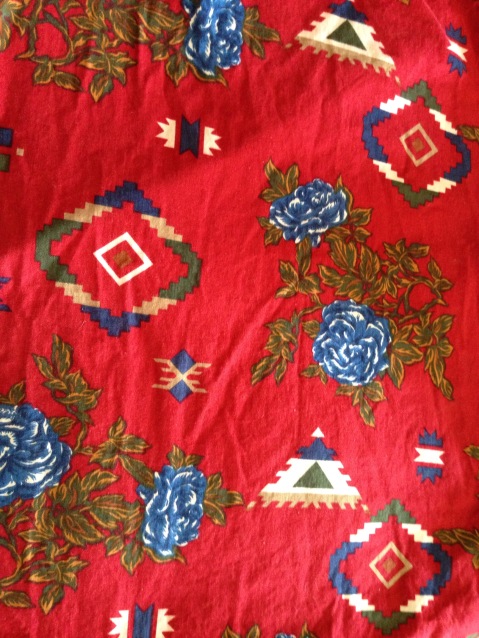 Woke up to snow on the ground. Happy Spring!

yes, I’m the guilty designer of many.  Sharon Mann’s cute Christmas sweater card caused me to look through the archives, and here are a few I found.

Into the Deep Forest

Light is cast into the deep forest,
and shines again on green moss.

It’s National Design Week at the Cooper-Hewitt Museum, and one of the honorees this year is textile artist Jack Lenor Larsen.  This grid is inspired by one of his weavings.  It reminded me of the light in a forest, and Wang Wei’s poem reflects that feeling beautifully. 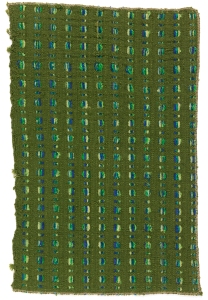 I’ve spoken before about the show I saw at The Drawing Center with textiles as its theme (http://www.drawingcenter.org/en/drawingcenter/5/exhibitions/9/upcoming/806/thread-lines/).  It was interesting to me that a few of the artists used sweaters and sweater graphs in their work, but I was put off by the fact that they used sweaters that other people had designed, once again exploiting the creative work of those mostly anonymous and underpaid textile artists.

It occurred to me that I could exploit myself.  I’ve been re-purposing my unsold swatches from my own design work for pillows and dolls–why not make an artistic statement derived from their original purpose?  Over the 20+ years that I designed and made these miniature sweater fronts, I must have produced thousands of designs.  I have hundreds that were returned from my reps (because they didn’t sell) to choose from. 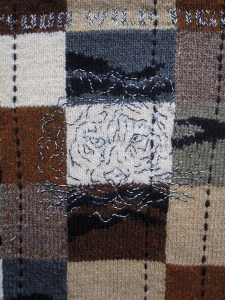 Animal skin as a motif is perennially popular; I decided to combine some of those patterned sweater designs with my concern about endangered species.   I embroidered in black and white duplicate stitch a statement–“there are less than 4000 wild tigers left in the world”–and a ghostly tiger face on top of the knit sweater front.

What do you think? 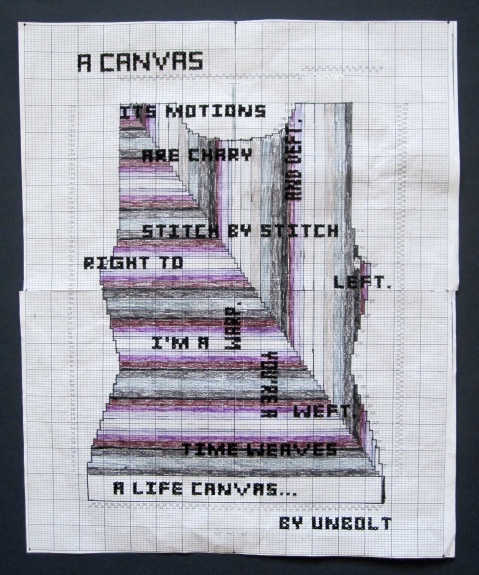 Its motions are chary and deft.
Stitch by stitch. Right to left.
I’m a warp. You’re a weft.

Tetiana Aleksina’s poem of last December proved the perfect muse for an idea I had in the back of my mind at the time.  I arranged and cross-stitched it onto one of the working graphs done during my many years as a knit designer.

I probably have several hundred of these graphs, along with knitted swatch samples, that I haven’t repurposed or discarded yet (I threw out many of the graphs and now I’m regretting it a bit…).  What to do with them?  I’ve made dolls and pillows and masks from the swatches, but haven’t done anything before with the designs on paper.

Tia (aka Unbolt) always provides vivid images in her poetry.  She also enjoys collaborations.  Her poem”A Canvas” takes fiber work and puts it into the larger human context.

My sister-in-law (a weaver) and I went to an exhibit at The Drawing Center last fall called “Thread Lines” that explored the connections between drawing and fiber.  I was familiar with some of the artists but many were new to me.  And, as always, I did not agree with the curator on the validity of all the selections.  Several of the works represented took working patterns for weaving or knitting and made them into art.  The one I had the most problem with in that situation was also the jump start to an idea about my own knitted designs.

Robert Otto Epstein took a graph from a knitting book and copied it “by hand” in pencil.  OK…maybe he is making a political statement about the fact that designs are not done by hand any more, but on the computer?  If so…couldn’t he even come up with his own design?  or combine it with a computer-generated one?  or make it more interesting, exciting, thoughtful, beautiful?  It didn’t resonate with me, that’s for sure.

one of my working graphs

My knit graphs (all done “by hand” and designed by me), and those of the many designers (mostly women, paid a pittance) that I worked with over the years, seemed much more suitable for framing and hanging on a wall in a gallery than something copied by a philosophy student from a knitting book.  So I began thinking:  how to present them?  What could I do to enrich the work I had already done?  I thought first of quotes that related to the design, and I may do some of those too, but Unbolt’s poem actually got me working.  I work slowly (as I have often lamented), and cross stitching on paper is also slower than on fabric, but I was pleased with the (months later) finished result.

Thank you Tia, for your inspiration!  And for those of you not yet familiar with her blog, check it out here:https://unbolt.wordpress.com/

This seemed to fit with the lovely weather here in the Northeast United States. Done during my textile designing days.

Kerfe is a master of the grid. Today I divided a piece of drawing paper into a grid roughly 1.5 inch squares. My approach seems to go back to the good old textile design days. I like Kerfe’s idea of exploring the grid. This one is more like a crazy quilt.

The Cat on my Drawing Table

Anyone with a child of a certain age (20 years, give or take) will recognize the glassy-eyed stare of Zip, the beanie baby cat.  My daughter was given 2 beanie babies for her 3rd or 4th birthday, my first encounter with them.  She promptly named them blackkitty and brownkitty, but blackkitty was clearly the favorite, and remained so for many years.  She ended up with several although I can’t remember the names she gave the other ones.  The one pictured above guards my drawing table.

I made her a blackkitty sweater, back when I had a ribber for my knitting machine. 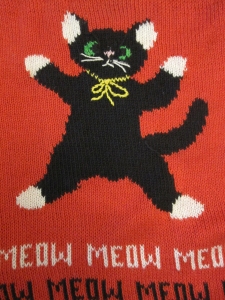 And sending out good vibes to the real black kitty in our lives, our neighbor’s cat Geri, who’s under the weather these days.  Hope to see you on the deck soon.